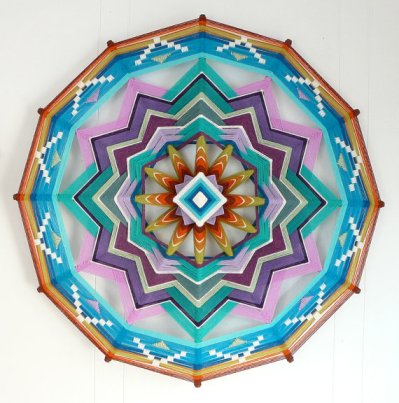 Jay Mohler started making Ojos de Dios in his Hippie days, back in the late 60’s, after seeing Ojos sent as part of an exhibit sent by the Dalai Lama of Tibet. “These ojos from Tibet were almost exactly the same as ojos I’d seen earlier made by Hucholes in Mexico. Since then I’ve evolved my own work to 12-sided designs that I believe encompass patterns of many beliefs around the world.”

I came across these mandalas on Etsy when I was working on a mandala project for my 3rd, 4th, and 5th graders.  I was intrigued by the string design and so were my students.  We had already studied the sand mandalas made by the Buddhist monks, and these string and wood structures are a more permanent fixture that the students could focus on.

The Ojo de Dios or God’s eye is a ritual tool, magical object, and cultural symbol evoking the weaving motif and its spiritual associations. For the Huichol peoples of western Mexico, the God’s Eye is symbolic of the power of seeing and understanding that which is unknown and unknowable, The Mystery. The four points represent the elemental processes earth, fire, air, and water.”